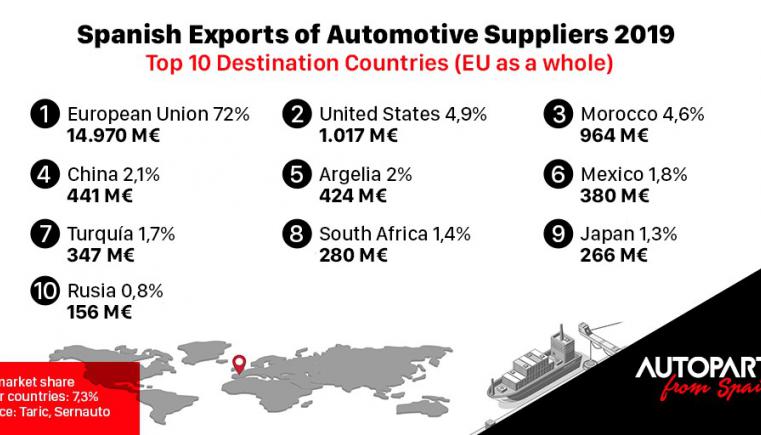 China, a market of opportunities for Spanish automotive suppliers

Autoparts from Spain, as a platform that supports Internationalization of Spanish automotive suppliers, is further analyzing all the opportunities that the Chinese automotive market offers to the Spanish aftermarket sector. Something that is already commonly known, as it is sustained by the fact that all the companies members of Autorparts from Spain have an active rol in China, but that today is even more relevant, not only for the Spanish component sector, but also as an element that can help the Spanish economy recovery post covid19.

Sonia López, President of SERNAUTO’s Exterior Commission considers that today China’s automotion is one of the most dynamic markets thanks to the measures adopted to stimulate purchase in the automotive sector after the coronavirus-caused halt.

China is the 1st vehicle manufacturer in the world and the 2nd car park in the world. Regarding Spain, it is one of our main commercial partners. In fact, in later years, this market displayed growth rates to become a relevant client for our exports; besides, it is one of the few markets with growth rate numbers in the first quarter of 2020.

InterChina Consulting’s Managing Partner, Eduardo Morcillo, States that Asian economy shows an industrial production index higher than 50%. It indicates its quick recovery. A clear example for the automotive sector with a chain production already at a 98% of its standard activity level.

Regarding estimations on vehicle sales, it is considered that this year will close with only a 10% decrease, with figures around 19 million of sold units. Besides, it shows two clear tendencies: the role of the aftermarket segment, which is one of the areas to experiment more projection and the strong consolidation process between OEMs and the Tier1 and Tier2 supply levels.

About market previsions for the second quarter this year, two disruptive changes are observed: one: Tesla’s placement in China, estimated to increase electric vehicle sales. Two:  there is a relevant share of the young consumer segment, former user of public transport and new-tech alternative mobility who now wants to own a vehicle.

One of the companies belonging to our platform, RTS, states that their decision to expand to a “new” market such as China was motivated by strategic reasons and also due to the potential of internal consumption shown by this country

After 15 years settled in China, with a market and a culture demanding adaptation and redirection and with a committed local staff, they have reinforced their presence by creating a tech-commercial branch and a trading company. They intend to empower their presence both in the local market and all the Asia-Pacific area. Currently, they are suppliers both for the supply chain, especially for electric vehicles, and for the local spare-part market.  They have diversified their own matrix.