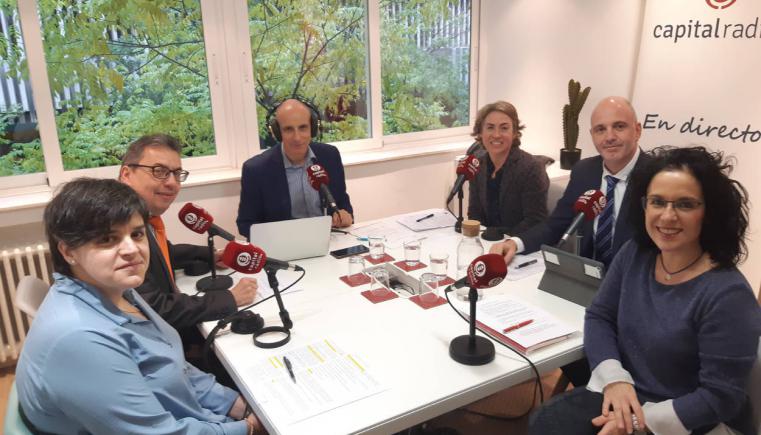 This week our article is devoted to talk about an interesting debate, on the radio program “Motor Sobre Ruedas”, of Capital Radio, in which some of our companies took part. Autoparts from Spain was guested by the radio station because we both share an opinion: “The internationalitation is key for growth of Spanish companies.”

The debate started highligthing a data: “Between May and August 2019, the exports of Spanish automotive equipment and components reached a value of 6,548 million euros, representing a decrease of 6.2% compared to the same period last year.”

According to Begoña Llamazares, Head of Markets at SERNAUTO and Coordinator of Autoparts from Spain, this figure, despite of being a good data, means a slight slowdown. According to Llamazares, “the sector is beginning to be affected by the consequences of the economic contraction in the main European markets, by the consequences of Brexit, as well as by the protectionist measures arising from the trade war between the United States and China.”

These circumstances affect not only to automotive sector, but to the industry in general terms, because when external markets resent, this affects exports.” But Llamazares highlightes that this is a matter that we can face, because “Marca España has a high added value.”

In addition, as the radio program host points out, initiatives like Autoparts from Spain also contribute to show abroad the hihg leve lof quality that Spanish automotive equipment and components sector offers, a formula of value to take the step towards internationalisation.

In this sense, regarding to decide to start an internationalitation process, Manuel Fumanal, Head of Exports at AIRFREN, a company specialist in developing components, especially for brakes for commercial vehicles, points out the fact that in 2000 “we decided start an internationalitation process as something necessary to grow, beacuse international markets offer interresting opportunities”. And he higlightes that “at that moment we started that process with the support of SERNAUTO, taking part in international fairs in Europe”, and now, the company has not doubted in taking part in Autoparts from Spain platform.

Urtza García, Commercial Director at AL-KO, manufacturer of shock absorbers since 1940, specialising in the manufacture of shock absorbers for both the aftermarket and first equipment, as well as customised and railway shock absorbers, points out that AL-KO is exporting since the early stages, but to markets near of its production centers, like France or Italy. “However, now we export to over 70 countries in the five continents, being leaders of the European market of the manufacture of first-equipment air suspension shock absorbers for heavy vehicles, covering a 50% of the market." Urtza states that the reason because of AL-KO decided joining Autoparts from Spain is the boost that the platform provide to the sector internationally, setting up sinergias among companies, and taking part in international and intercontinental fairs with the support of Marca España. In this sense, García recommends to every company of the sector to start an internationalitaction process along to Autoparts from Spain. “It is worth it,” hihgligthes, because, “it means a formula for diversifying risk due to the company does not depends on just one market.”

Ana Muñoz, Head of Large Accounts at COJALI, a Spanish company devoted to the design, manufacture and sale of products and solutions for industrial vehicles with almost 30 years of experience, points out that in their case, the internationalitation process began in 1994, with the inauguration of the first subsidiary in France, and in 1998 COJALI decided to create an Export department. In this sense, before the possibility of joining Autoparts from Spain, the company did not hesitate. According to Muñoz, "belonging to Autoparts from Spain means valuing our work in innovation, development and research, amplifying our visibility abroad".

In the case of FARE, according to Miguel Menéndez, Export Manager of the company, "this is a particular case," he says. Unlike other companies that begin the commerce of their products in the domestic market, FARE began its journey towards export. The reason, that in its beginnings, the company was only devoted to manufacturing, not to commerce. At the time it began to commercialize, it was done looking at abroad, mainly to North African countries, "to then introducing our company into the domestic market," he says. Thus, despite the companys wide experience in the field of exports, Menéndez points out that they did not hesitate to join Autoparts forma Spain in order to extend their radius of action abroad. "There are countries in South America or Eastern Europe that are difficult to reach," he explains, which means having external resources at their disposal in this area. "And Autoparts from Spain allows us to reach many places where it is not possible for us to reach alone", Menéndez sums up, an opinion shared by all the participants at the debate table.

Likewise, all the representatives of the companies that took part in the radio broadcast think that belonging to Autoparts from Spain is an important boost to the internationalisation policies of their companies, supported by Marca España, a powerful commercial tool that provides added value to their companies. And the results of Marca España are already patent, because today, "in international markets, Marca España already has an important recognition," stated Fumanal.